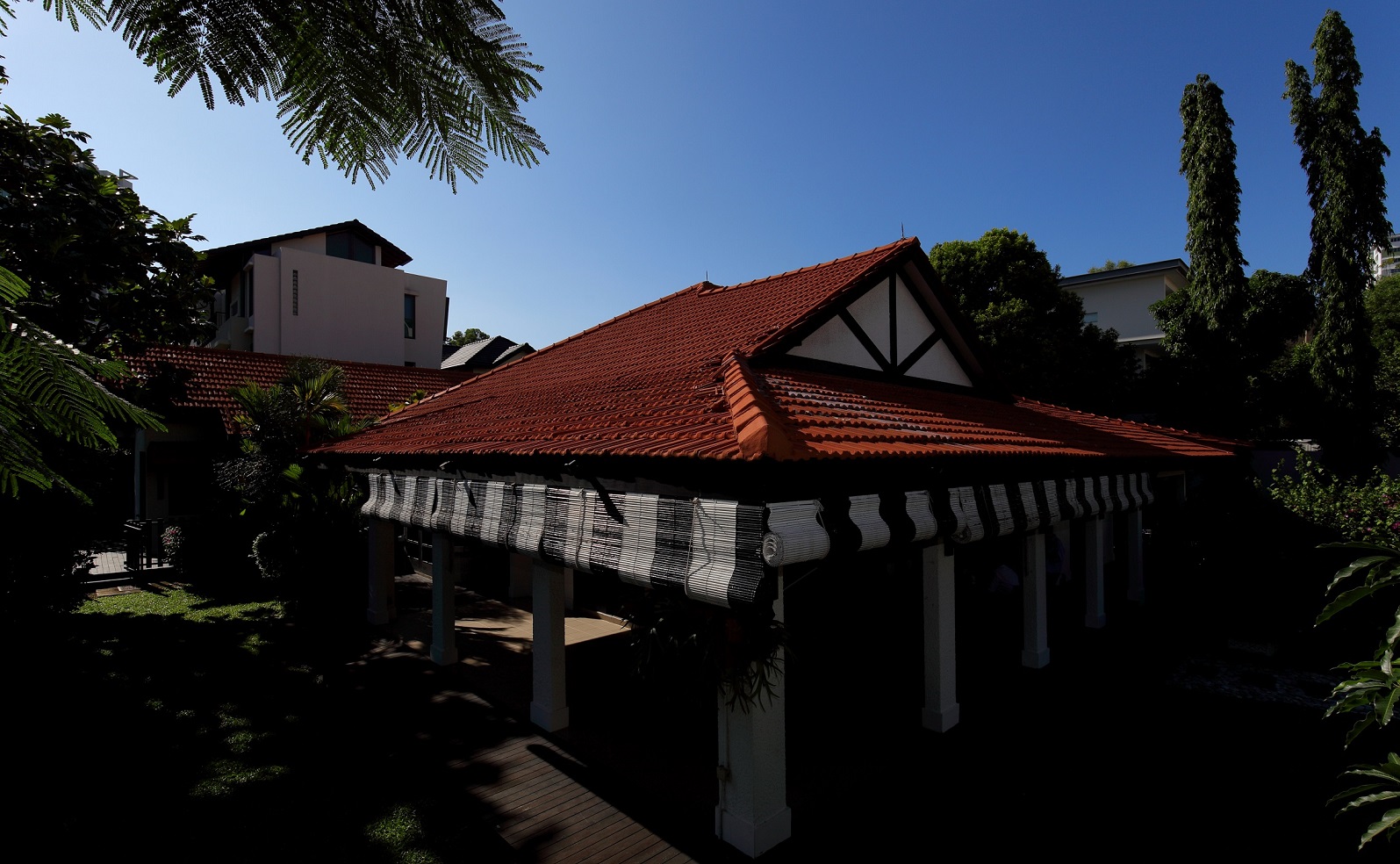 SINGAPORE (EDGEPROP) – A black-and-white, single-storey bungalow sitting on a freehold site of over 12,000 sq ft at a landed estate off Upper East Coast has been put on the market. Will it be redeveloped or will the new owner retain the charm of the existing property?

The original bungalow was built in 1964 and its design was inspired by the black and white colonial-era bungalows (Photo: Samuel Isaac Chua/EdgeProp Singapore)

In the Bedok area in the east, Parbury Avenue, located just off Upper East Coast Road, is a coveted address among landed property owners. Bungalows sitting on large, freehold sites of more than 10,000 sq ft have become increasingly rare as many have been sold to property developers over the years. Some have been redeveloped into smaller landed properties such as semi-detached or terraced houses, while others have been redeveloped into low-rise condominiums.

Today, there is only a handful of bungalows sitting on land areas of at least 10,000 sq ft in the landed property enclave of Parbury Avenue, Lucky Heights and Sennett Estate. Many of the original single-storey bungalows have since made way for 2½ to three-storey contemporary detached houses.

One of the few remaining single-storey bungalows is located at the corner of Parbury Avenue and Riviera Drive. The house has a built-up area of 5,030 sq ft and sits on a 12,056 sq ft, freehold site. It is one of the largest freehold bungalow plots at Parbury Avenue today. The current owner, who requested anonymity, purchased the house back in January 2011. To appreciate the house, he says, one has to understand its history. Built-in 1964, the house was designed in the style of the colonial era black-and-white bungalows which in fact, originated from the Hindi word Bangla, which refers to the houses built for European settlers in Bengal. “If you go to India, you will see a lot of houses like that – basically single-storey houses with a verandah all around,” he explains. The previous owner who purchased the bungalow in 1984 had retained the original house. However, he added a rear extension with multiple small rooms.

When the current owner purchased the property in January 2011, he renovated the rear wing of the house and converted it into the private wing with five en suite bedrooms. The bathrooms were completely renovated and enlarged. He had originally wanted to build a 30m swimming pool that would wrap around the house. However, that would mean having to relocate the underground pipes and spending more than $1 million just doing that. He abandoned the idea and opted to build a jacuzzi pool and a fountain instead. The room facing the jacuzzi pool has been converted into a gym with glass sliding doors opening out to the jacuzzi pool. He also fenced up the swimming pool and pool deck. “We don’t want intoxicated people at one of our parties falling into the pool,” he says. As he has a fondness for saunas, he built one in the spacious en suite bathroom.

The jacuzzi pool at the rear end of the garden is enclosed (Photo: Samuel Isaac Chua/EdgeProp Singapore)

All the five bedrooms come with bay windows and three of them have doors leading directly to the garden. One of the bedrooms with the French doors has been turned into his study. “It’s great if you need to escape,” he adds. The previous owner had created a Chinese-style courtyard garden situated between the front and rear wings of the house. The courtyard is accessible via French doors and there is a bank of windows overlooking it. “The idea was to bring natural light and the greenery into the house,” he says. Over the years, as the garden in the courtyard had become too difficult for the current owner to maintain, he had it tiled with French vintage tiles. “We couldn’t find those tiles in Singapore, but we found them in Vietnam,” says the owner. “We have an apartment in Paris that has the same tiles.”

The gym opens out to the jacuzzi pool (Photo: Samuel Isaac Chua/EdgeProp Singapore)

The owner and his wife have also furnished their home with choice artworks, vintage furniture and antiques. This is evident from the century-old bookcases, and the antique dining table which is more than 150 years old and can fit 16 for a formal dinner. “Wherever we could, we would always pick up such furniture pieces for the house,” he says. The living room has a bar corner with a countertop and panelling of walnut wood. It was once the powder room, but the previous owner had converted it into a bar area in the 1980s. A pair of antique Viennese crystal chandeliers in the living room, which came with the house, was restored by the current owner. At the verandah, the wooden beams in the ceiling are part of the original house built in 1964, points out the owner. It is where he can be found early in the morning, as he can see and hear the birds sing. The lush greenery, with mango, the flame of the forest and neem trees not just ensure privacy from neighbouring houses, but attract birds to build nests. “It’s like a nursery,” he says.

The living room with the bar area of walnut wood in the corner and Viennese chandeliers that have been restored (Photo: Samuel Isaac Chua/EdgeProp Singapore)

The owner and his wife entertain family and friends at the house frequently. The enclosed kitchen adjacent to the dining room is also spacious and is a favourite gathering spot. “It’s the heart of our home,” he says. A close family member and regular visitor to the house is the owner’s niece, Nisha Chand, who lives nearby at Upper East Coast. “We really enjoy the house,” she says. “My son is five years old and all his birthdays were celebrated here.”

The kitchen is the heart of this home for the couple who entertain family and friends frequently (Photo: Samuel Isaac Chua/EdgeProp Singapore)

Back in early 2011, it was the owner’s wife and his friend who viewed the property first when it was put up for sale. “They kept telling me I have to see the house,” he relates. “As a favour to them, I came to view the house that evening and sealed the deal on the spot.”The owner grew up in the Tanjong Katong and Siglap area in District 15 in the east. He had always been fascinated by the history of the area. He remembers watching movies with his friends at the former Ocean Cinema for just 50 cents each. In the old days, the Bedok area used to be a fishing village, he adds. As much as they love the property, the owner and his wife feel that the house is now too big for the two of them to maintain. They reckon they will move into an apartment.

The dining room with French doors leading out to the tiled courtyard (Photo: Samuel Isaac Chua/EdgeProp Singapore) As the house is in an established housing estate, there are many amenities nearby, says the owner. It is close to East Coast Park and the beach. For families with children of school-going age, Temasek Primary, Secondary and Junior College are also nearby. The upcoming Bayshore MRT Station on the Thomson-East Coast Line is within walking distance. The house is also within the proximity of supermarkets, wet markets and food centres. “It’s very convenient, especially if you just need to run out and buy some basic necessities like a loaf of bread,” says the owner.

Choice to retain or redevelop

The house at Parbury Avenue has recently been put on the market for sale by Jeffrey Sim, associate executive director of OrangeTee, the exclusive marketing agent. The asking price is $14.5 million, or $1,203 psf based on land area. According to Sim, the house is attractive not just to owner-occupiers who appreciate the charm of a black-and-white bungalow, but also to property developers. This is due to the size of the land, he says. It is big enough to be subdivided and redeveloped into smaller landed properties: for instance, a detached house and a pair of semi-detached houses; two pairs of semi-detached houses; or four terraced houses.“The new owner could also redevelop the property and stay in one of the houses, and sell or rent out the remaining properties,” reckons Sim.

En suite master bathroom and all the other bathrooms in the house were newly refurbished by the owner (Photo: Samuel Isaac Chua/EdgeProp Singapore)

The versatility of the site – be it for owner-occupiers, investors or developers – has proven to be attractive. Just the past weekend alone, there were seven potential buyers who came to view the property, he adds. This is because there are hardly any bungalow sites of such a size on the market today. In fact, there has not been any recorded detached house transaction at Parbury Avenue in nearly a decade, based on caveats lodged with URA Realis. The latest detached house transaction in the landed housing estate was for a property at Sennett Road sitting on a small, freehold plot of 4,973 sq ft that changed hands for $5.2 million ($1,046 psf) in May 2018.

If you are looking to sell or purchase properties in Singapore, our team members can help you with Affordability Assessment and Asset Progression Plan. Call us now at +65 86666 944 or +65 9844 4400